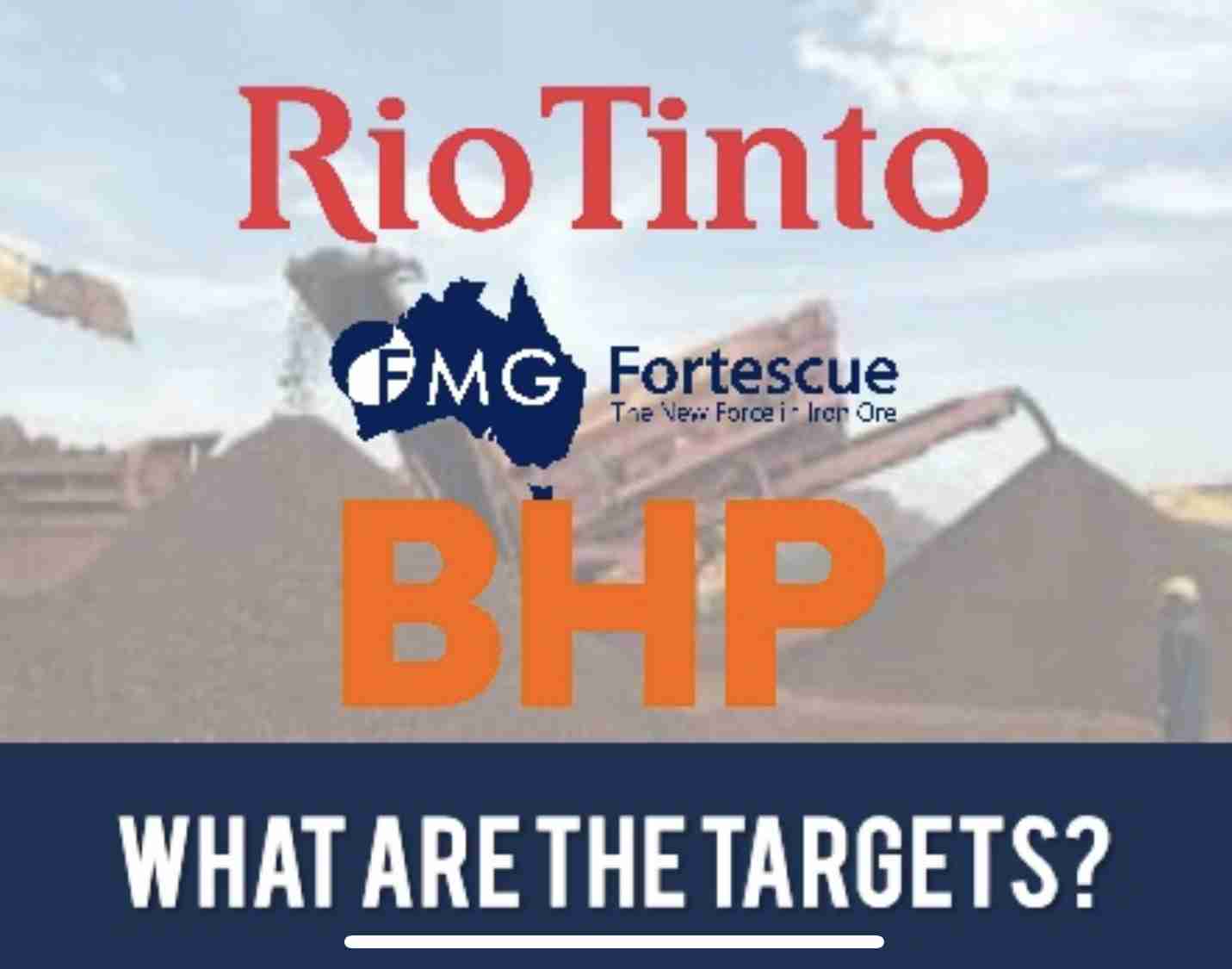 Stock stocks to watch close for a reversal.

Iron Ore is a key commodity that drives FMG and RIO stocks price up or down, BHP is further diversified into other commodities as well, however, BHP also takes big hit to the downside or upside depending on Iron Ore price movement.

Furthermore, Brazil second biggest Iron Ore producer Vale has also back in full production, hence flooding the market with iron ore. The key is to detect when the turn around will happens to benefit from buying these stocks at lower prices.

Fortescue Metals Group Ltd (Often referred to as FMG) is an Australian iron ore company. As of 2017, Fortescue is the fourth largest iron ore producer in the world after BHP, Rio Tinto, and Vale. The company has holdings of more than 87,000 km2 in the Pilbara region of Western Australia, making it the largest tenement holder in the state, larger than both BHP and Rio Tinto. The SP is directly exposed to iron ore price fluctuation, despite the

SP has fallen 34% within a month and it looks like will hit $15 very soon.

Our target for FMG is $15 if Iron ore stays above US$100 a tone. Hence, we don’t know yet how low Iron Ore can go, we rather stay out for the moment. By backing two years when iron or was trading around $80, FMG shares were worthing $10-$12, hence it is likely that FMG could have further sell pressure on its SP potentially even hitting $10 at some stages. WE have setup a target 2 of $10 per share.

Traders or investors should wait for a strong reversal indicator to appear as trading against the trend is not recommended and most of time ends up in loss.

Rio is the third largest iron ore producer in the world, however unlike FMG, Rio offer investors exposure to other commodities as well. Rio tinto searches for and extract a variety of minerals worldwide, with the heaviest concentration in North America and Australia. Iron ore is the dominant commodity, with significantly lesser contribution from aluminium, copper, diamonds, gold and industrial materials.

SP has also taken the hit after a great FY21 results. SP has fallen 24% within the last month, outperforming its peers FMG and even the giant BHP which has seen its SP slashed recently when announced was selling its Energy operation to Woodside. SP is currently trading pretty much at the same levels of last year when iron ore price was ranging around $120-$125, and could go as low as $90 if continue pressure on the commodity remains. Buying at current levels also poses the same risk of FMG (buying against the trend). It is currently technically cheap as it trades 9% under SMA 250. Our target 1 is $90 provided that Iron Ore stays goes under US$100 a tone. If iron ore meet the same levels of 2019 we could well see Rio shares at $80 again, making it our Target 2 , $80. As well as FMG, no reversal indicator is found yet and SP appears to be in free fall still.

Buying Rio under $90 could be a pretty decent entry for the long term.

BHP is the world’s largest diversified miner supplying iron ore, copper, oil and gas (recently being sold to WPL) and metallurgical. The company’s major assets include Pilbara iron ore, Queensland coking coal, Escondida copper and conventional petroleum asset (recently being sold to WPL). BHP supposed to be the least risky of the three to invest, however has taken larger hit on the SP due the sale of the energy asset and the delisting of UK exchange.

SP is currently trading 25% under SMA taken heavy falls due iron ore, delisting and sale of the energy asset. It could potentially be the best buying among the three of these stocks, however we don’t see much of upside for the longer term with SP trading above $40. Because this BHP is not only exposed to iron ore, it makes pointless to directly compared its SP to Iron ore price movement, despite the market sentiment is currently playing against all these companies. We believe that we could soon see SP down to $35 per share which makes our target. As well as the other two peers we haven’t yet seen any reversal indicador. SP is currently technically undervalued with SP sitting 9% under SMA(250) and 16% under SMA(9). Despite, the stock is technically undervalued, the macro economics plays very strong role in this appraisal therefore making BHP still a stock to watch only.

If SP falls to 35% it would be a fall of 34% on SP since August highs, which is generally a pretty normal fall. BHP fell 40% in COVID-19 crash, it is normal to assume it could fall 30-35% with Iron Ore crash, delisting and de investing all together, crash which one of the key drivers. Investors that want to buy into BHP, should be looking for signs of reversal from either the technical and the macro-levels.